After morning showers and the final events of the West Coast Reunion the following Vehicles and folks departed on the aftertour:

And in the moderns:

The group enjoyed a 2.5hr drive through the wonderfully varying Northern California landscapes to Plymouth. The route was not a direct one (it never is) and included a detour through West Point and a coffee break in the charming historic town of Volcano. 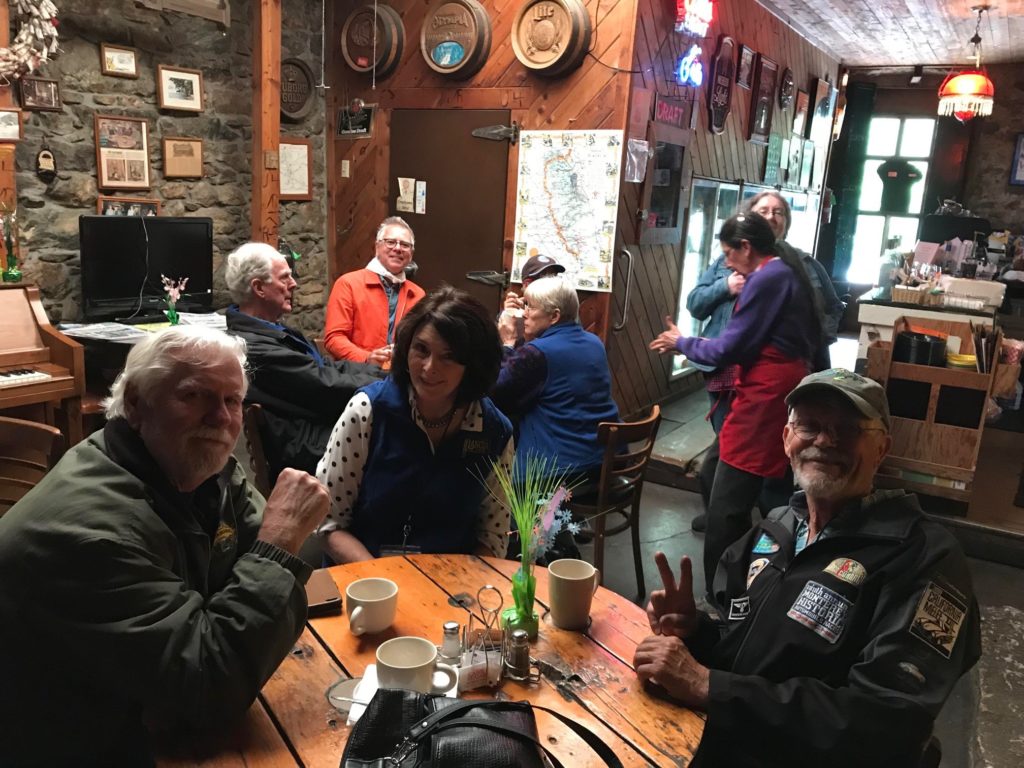 Alas the Fulvia Coupe was not running so well and could not make it up the steep hill leaving Volcano; however, Neil was able to find a less steep route to the north of the town, obviously something to look into.

Plymouth proved to be a quaint town and the Rest Hotel – a boutique hotel and a harbinger of changes that will soon hit the town- was absolutely wonderful as was the adjacent Taste Restaurant. Both highly recommended. 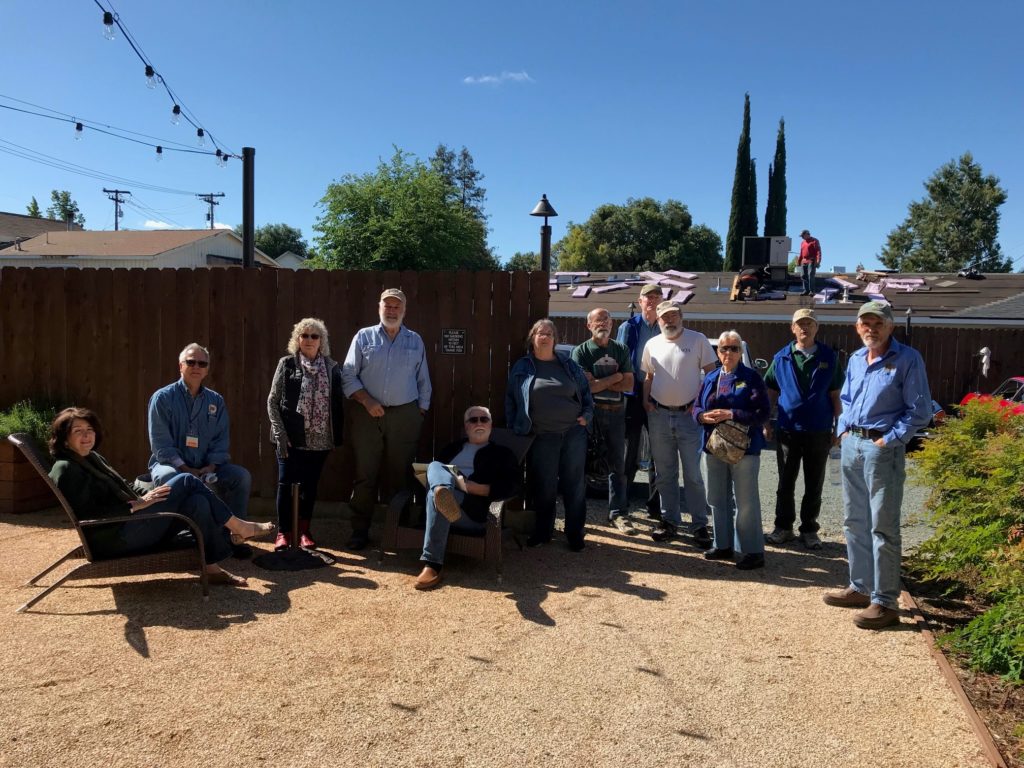 Following a tasty continental breakfast we headed north up SR49 through Placerville and some members diverted to Georgetown. Along the way, a young deer jumped out in front of Kjell’s car resulting in a bit of damage to the left headlights and left side. Fortunately, it remined drivable and Kjell was able to continue on the tour and get home. We then made an unplanned visit to Paul Thomasson in Georgetown. He has a very extensive collection of interesting vehicles including a classic Corvette, Mustang, Austin Healey, model T and a 1950s Borgward Silver Arrow all in various stages of completion. Unfortunately, the Perings Fulvia was having more issues and Paul was kind enough to rescue them and then we all managed to regroup for lunch in Nevada City. Then we headed up, the made for a Lancia, route 49 to Graeagle. 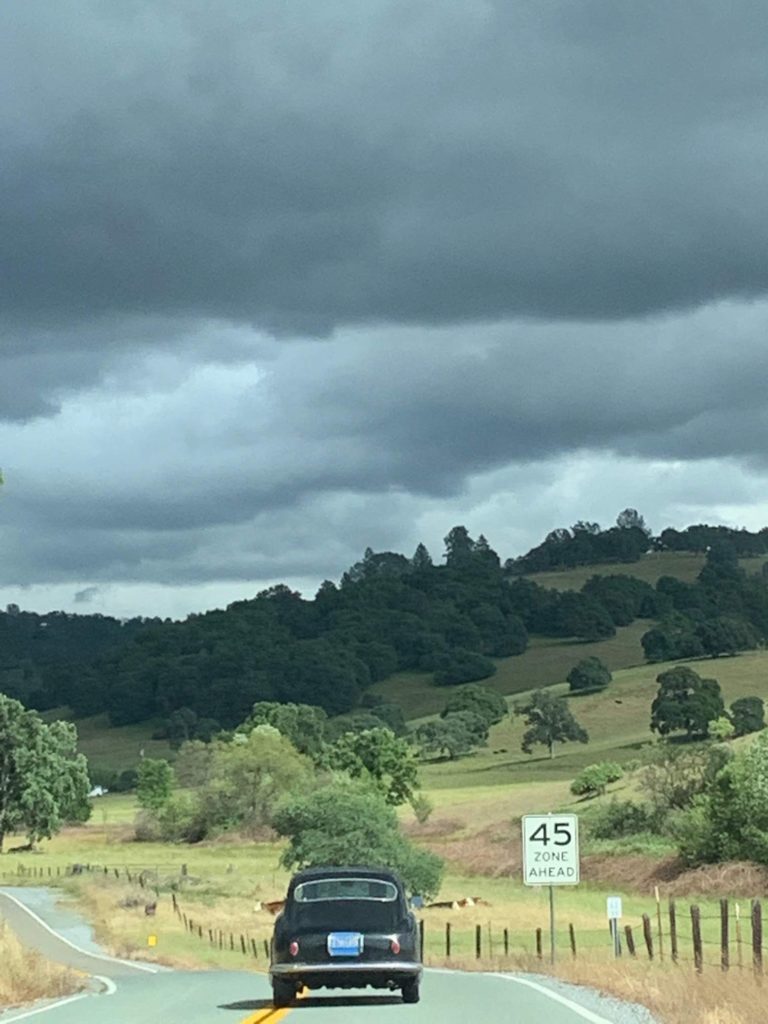 It got cold and the proposed Gold Lake Road shortcut was closed due to snow so we took the long way to SR 89. Chalet View Lodge was as pleasant as when we visited in 2014 and the ever-charming Lily English and her friend Ed…. came up from Chico to join us for the night and for dinner at the Iron Door restaurant in Jonesville. A light snow fell in the night giving each vehicle a lovely white top. 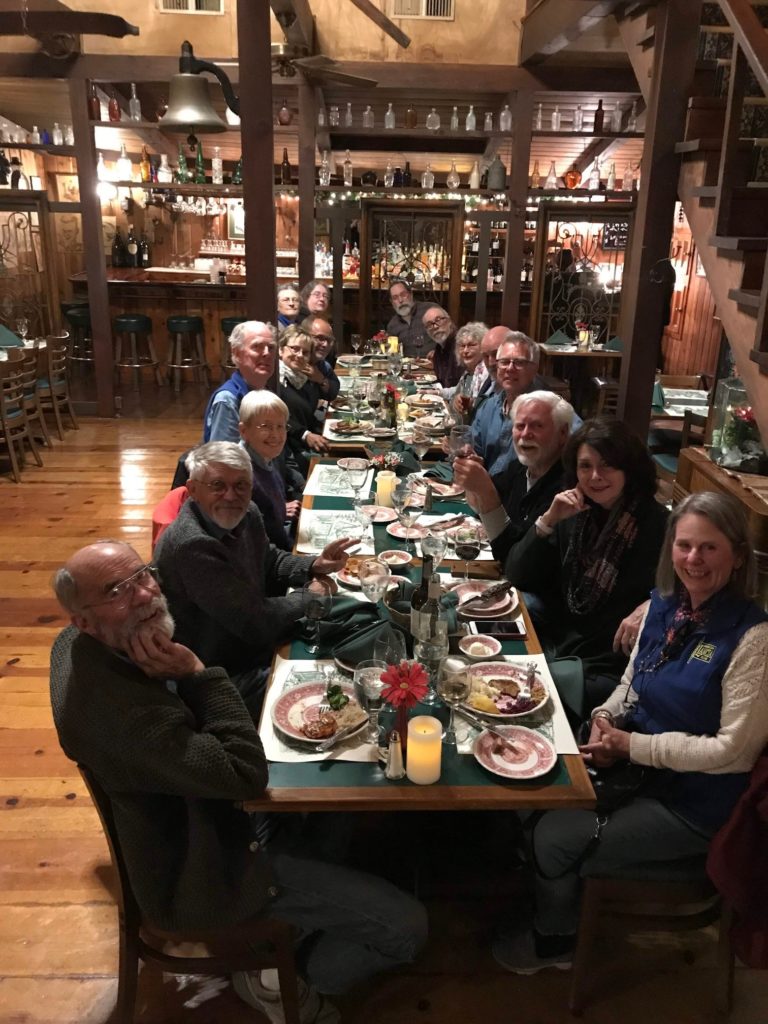 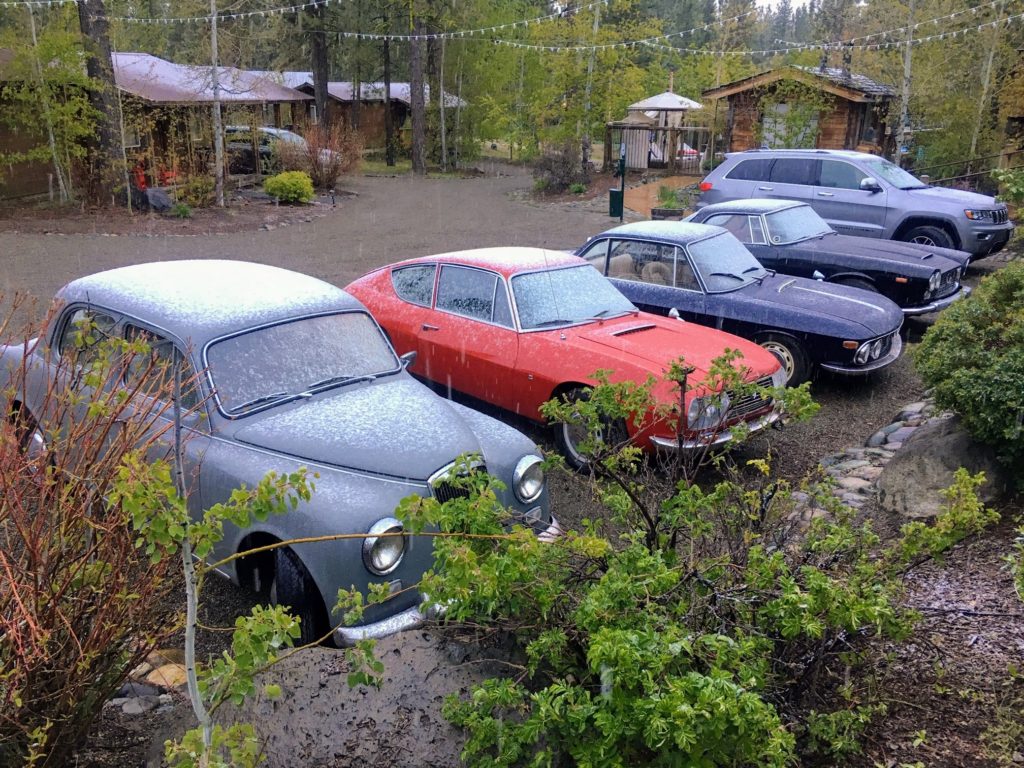 Obviously, what we thought was a light snow was more than that and the proposed route around Lake Tahoe was closed. As was route 49, 80, 50, 120,119, 89 and 4 (which we expected). So, breakfast was spent working out what to do. Eventually we decided on going North on 70 and down the beautiful North Fork of the Feather River and around the snow-covered mountains. Lynn and Steve and Kjell left the tour and returned home to Bishop directly from Graeagle and Paul and Vicky also returned directly to Chico (all as planned). 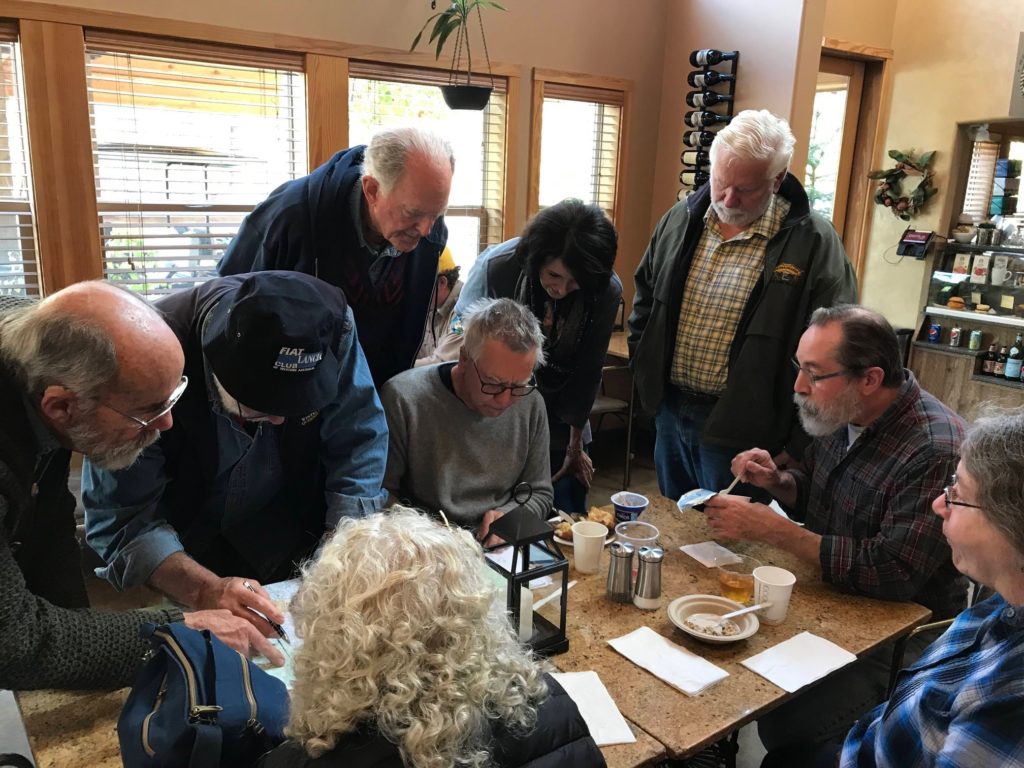 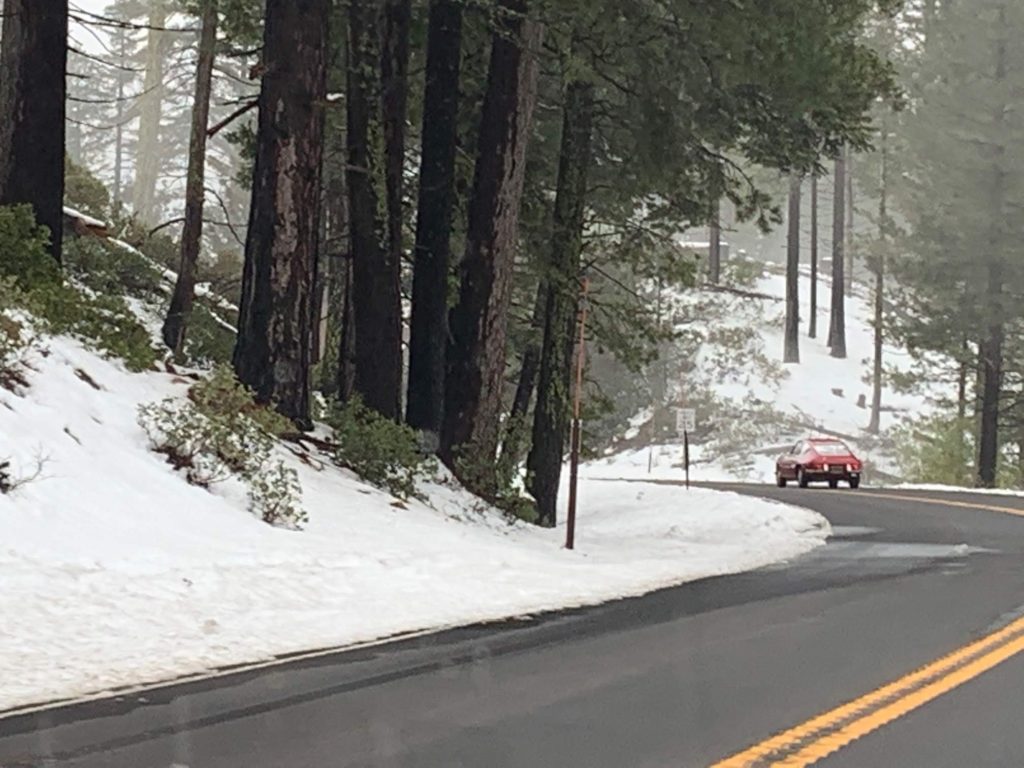 This new northern route created a long journey past Lake Oroville (no time to stop and inspect the reconstructed spillway) with lunch in Marysville then around Lake Folsom with a huge amount of water flowing over the spillway, through Plymouth to Arnold. The Meadowmont Lodge proved to be so much better than their website led us to believe and we enjoyed fine beer and wine and hearty food at the snowshoe brewery across the road.

Neil created a beautiful oil painting on the pavement as the Fulvia proved to be rather porous to oil.

A light rain during the night created an icy frosting over the cars.

Too wet to hike at Big Trees so we enjoyed a leisurely coffee and breakfast nearby and returned to the Meadowmont to start our day’s journey.

The B20 was having starter issues and had been parking on slopes to allow gravity starts. However, that did not work on a cold engine, so a tow start by the Mazda was orchestrated and that eventually got it going. Lucky to have a modern handy. Neil tightened up the loose distributor clamping bolt to help restore power, filled up with oil and we were off again. The Fulvia Coupé and B20 peeled off home to the Bay Area, leaving 3 vehicles remaining – Fulvia Sport, Abarth and Mazda – heading to Oakhurst. A brief stop at Columbia Historic Park/Town to pick up some gifts, lunch at Buck Meadows Cafe and then the astonishingly beautiful drive on 120 and through the bottom end of Yosemite, complete with a little snow on the ground, cloud covered mountain tops and waterfalls. Then down Wawona Road with a stop at Wawona Lodge (can’t remember the new name) but alas no bar was open, so we head off to Oakhurst. A rolling stop established a need for a Park Ranger to educate Steve Katzman on the vehicle code – but luckily no ticket.

We headed off to Fresno via North Fork (despite last night’s waiter telling us he would not drive through Nork Fork -he thought it a bit sketchy). North Fork claims to be the center of California, then through Prather, to Fresno to tour the amazing Forestiere Underground Gardens. It’s a must do if you find yourself in Fresno. 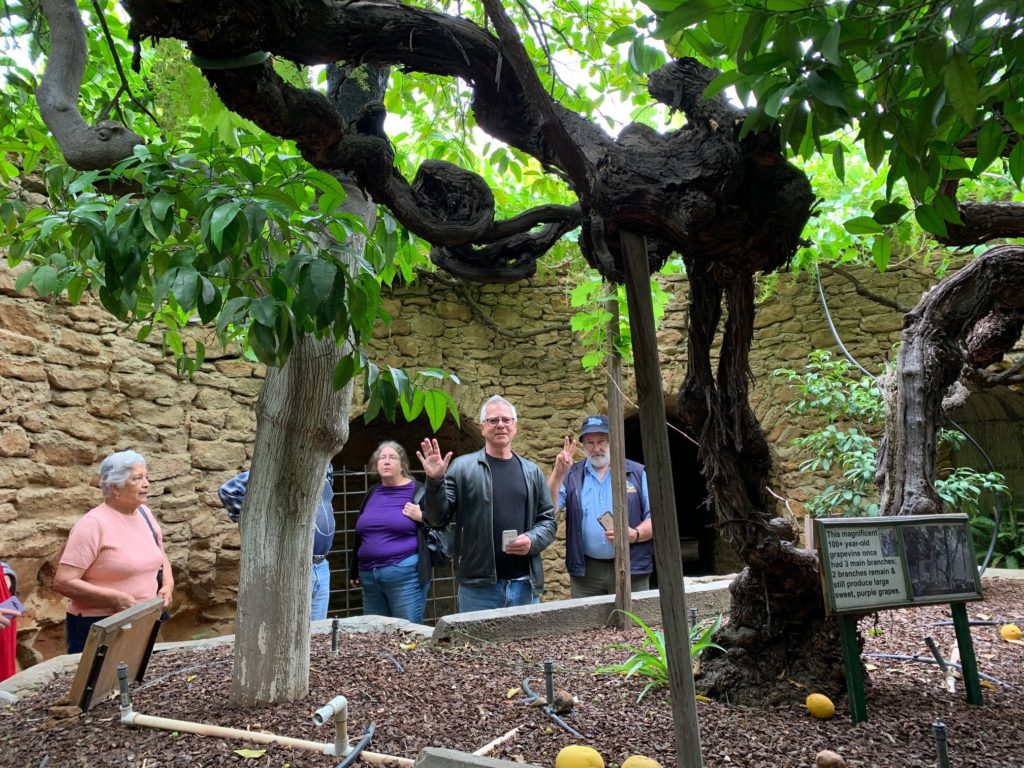 Then some tasty and fresh Vietnamese food just down the road and off to Three Rivers. The fun way is 180 to Dunlap then 245 to Badger and J21 to 198 into three Rivers. The 245 is a blast to drive in a fine Italian sports car but beware of the school busses. The Lazy J Ranch Motel was the ideal ending to our journey. Beer and wine on the porch overlooking the grounds, then Mexican food with more beer and wine and we were all feeling happy with our travels. 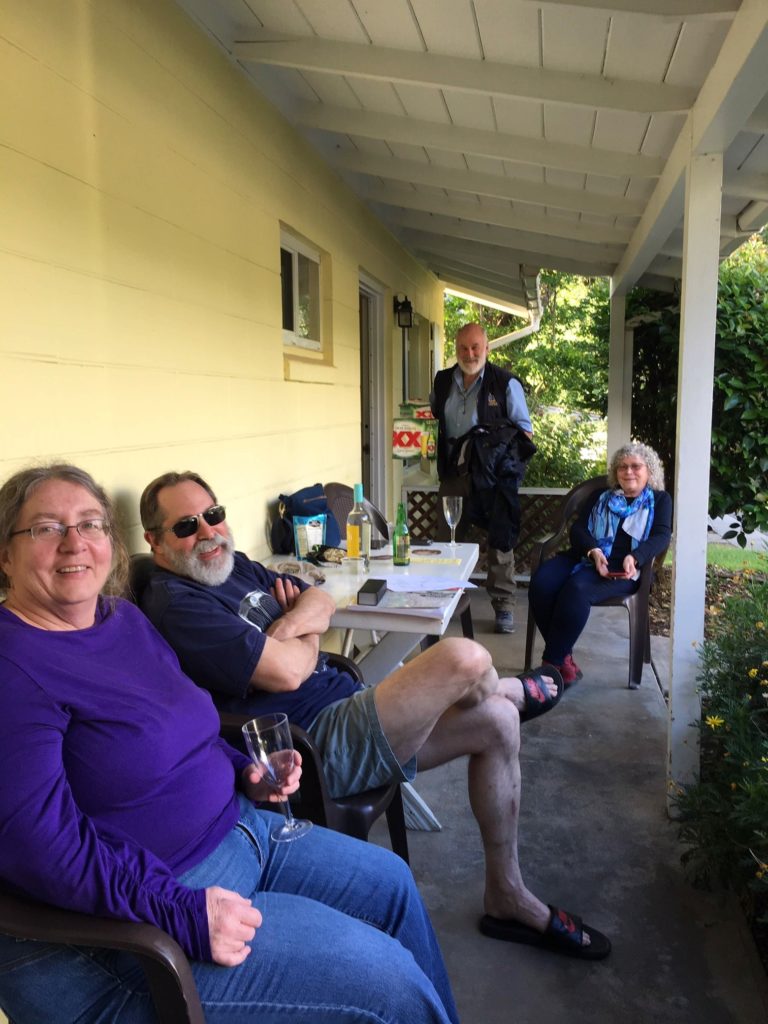 In summary, the roads were great, the cars made it (but not without work), the varying weather made things challenging, and the unexpected stops added interest.  And I think it safe to say we all had a great time.

Let’s do it again next year following the reunion, wherever that will be, and all members please join us.

Ps. For me this was a total 1490 mile road trip from Santa Monica including the Reunion drives.