Vicki and I have attended “Castlemaine” 5 times over the last 30 years.  I was somewhat shocked to realize that our first event was in 1985; mind you, I am not good at record keeping. We only know this because our program lists all the celebrity guests for each event; all 23 of them (the event is bi-annual, so say, 46 years).  The special guest in 1985 was Carlo Felice Bianchi Anderloni;  I remember riding in the back seat of a 1919 Kappa with Sig. Anderloni. In addition to having owned Carrozzeria Touring he was a fascinating and revered icon of the Italian automotive community.

Fast forward to 2013 where Michael Robinson was the featured guest speaker. Michael is a most unique individual. While in High School in Southern California he dreamed of designing automobiles inspired by Bertone’s  1970 concept car which led to the production of the Lancia Stratos. Michael followed his passion to become head of styling for Lancia and eventually the creative director at Bertone.  As you might imagine his life story makes for an incredible motivational speech.

So, finally for 2015 another American, and this time our own longtime friend Lancia collector and passionate enthusiast Geoffrey Goldberg.  But you see, I always thought Geoff was one of us and I was just slightly concerned that perhaps he was, you know, out of his league.  But no! Geoff more than deserves to be listed with the exalted company* who have been featured at Castlemaine before him.   His book Di Virgilio at the Center is a masterpiece.  Remarkably Geoff created an intimate friendship with Di Virgilio’s son Luigi, from whom he gained access to material directly from the hand of the father and also opened doors into the historical archives of Fiat and Lancia.  When Geoff spoke at Castlemaine he kept us entranced with the fascinating story of Lancia’s development of the V-6 engine as well as Di Virgilio’s personal history at the heart of the Lancia family. He also spoke of the intrigues: life at a factory that produced some of the most spectacular and innovative automobiles of the post war era.  Geoff left us with his personal theory as to why Gianni Lancia lost control of the company and a hint that this theory may lead to another book.  We all hope so. 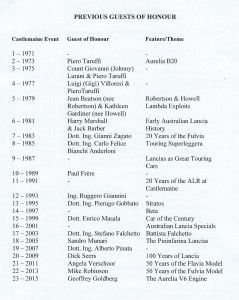