Lancia Heaven –John Campion’s Aladdin’s Cave
Jacksonville,FL
John Campion , co-founder and Chairman of APR Energy, graciously opened the
doors of his pristine and private showroom in Jacksonville, FL on Monday,
November 12 th ,2018 to his fellow Irishman ,Tom Gilmore ,wife Barbara and their
good friends Dale and Debbie Newcomb all visiting from the San Francisco Bay Area
and proud standard bearers for The American Lancia Club.
I had heard of this Lancia collection for a few years and with a vacation planned to
see the wild horses on Cumberland Island in Georgia a quick look at the map
confirmed that Jacksonville was less than one hour away. A few emails back and
forth with John’s executive assistant , Stacie Mirabella, and the visit was on!
John and I grew up rabid rally fans watching Paddy Hopkirk , Roger Clark and Billy
Coleman compete in the International Circuit of Ireland Rally held annually over the
Easter Holiday on closed sections of public roads…racing against the clock on
tarmac !…needless to say the speeds were barking crazy.
Billy Coleman was an Irish privateer from Co.Cork ‘showing up’ the Ford ‘works’
drivers in a tatty Ford Escort twin cam in 1969 when I was spectating and by 1977
when John was watching, Billy Coleman was driving a Lancia Stratos sponsored by
‘The Chequered Flag’ of London. Billy was driving with house money at this stage of
his career and the memory of this Stratos sliding through the early morning mist
seared the Lancia shield on to John’s brain.
Leaving Ireland in the mid 80’s to seek his fortune John started a mobile power
generation company to supply the needed power for the massive amplification and
light shows of U2 and David Bowie as rock concerts moved into arenas and
stadiums.
‘ShowPower’ ,co-founded by John, was acquired by GE and so having faith in their
business model John and his buddy went a few rungs up the ladder and founded
APR Energy the company that today provides mobile peak and off- grid power
around the world.
Yup!..with a wee bit of discretionary income coming his way “It was time to ditch the
Ferraris and get some real cars…competition Martini Lancias! “ said John.
The lobby of John’s showroom is furnished with aluminum shelving made from
aircraft wings , automotive posters beautifully framed and lit and the nose cone of a
Michael Schumacher Ferrari mounted on the wall and wonderful seating…..it all
looked so cool and not in the least ‘over the top’
‘Thanks for coming” says John bounding towards us giving us all a very warm
welcome. A brief discussion about the various artifacts on display and then “let’s go
and see the cars’!
Well I was not prepared for what we saw.
We were shown into a magnificent showroom and if the lobby was a ‘wee bit busy’
the showroom was an exercise in Italian minimalism.
The cars were presented against a red wall complete with recessed lighting on a
grey epoxy polished floor and are all beautiful prepared and in full running
condition.

We were captivated by the following Lancia
competition cars:
LC 2 ..chassis # 0001 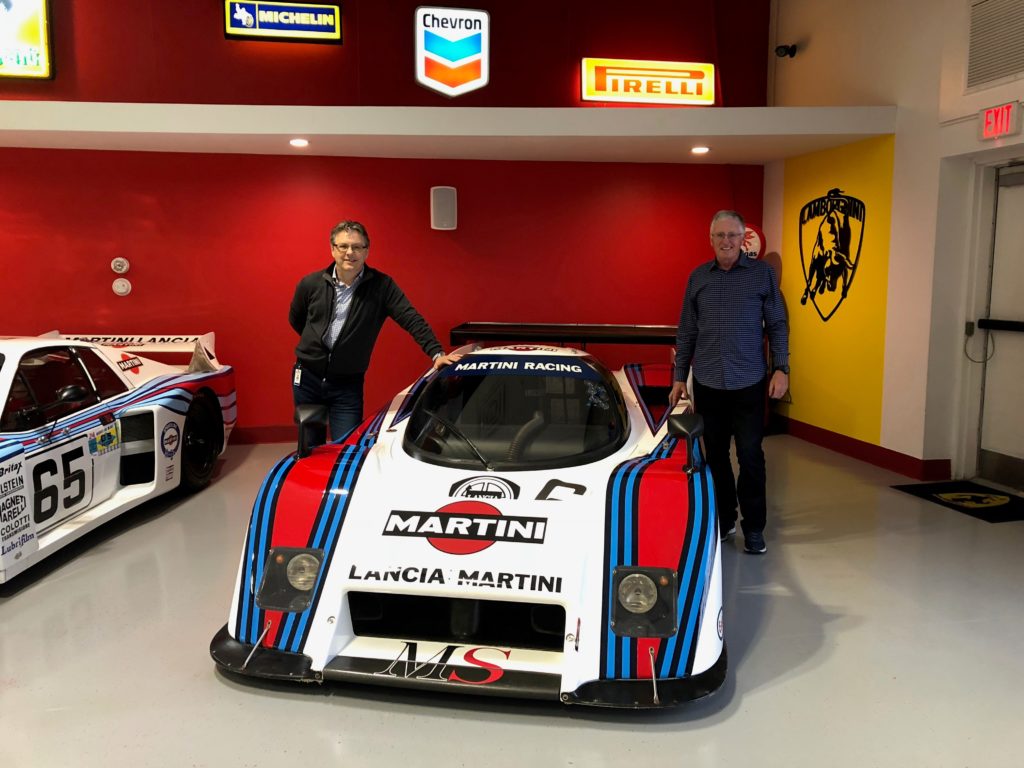 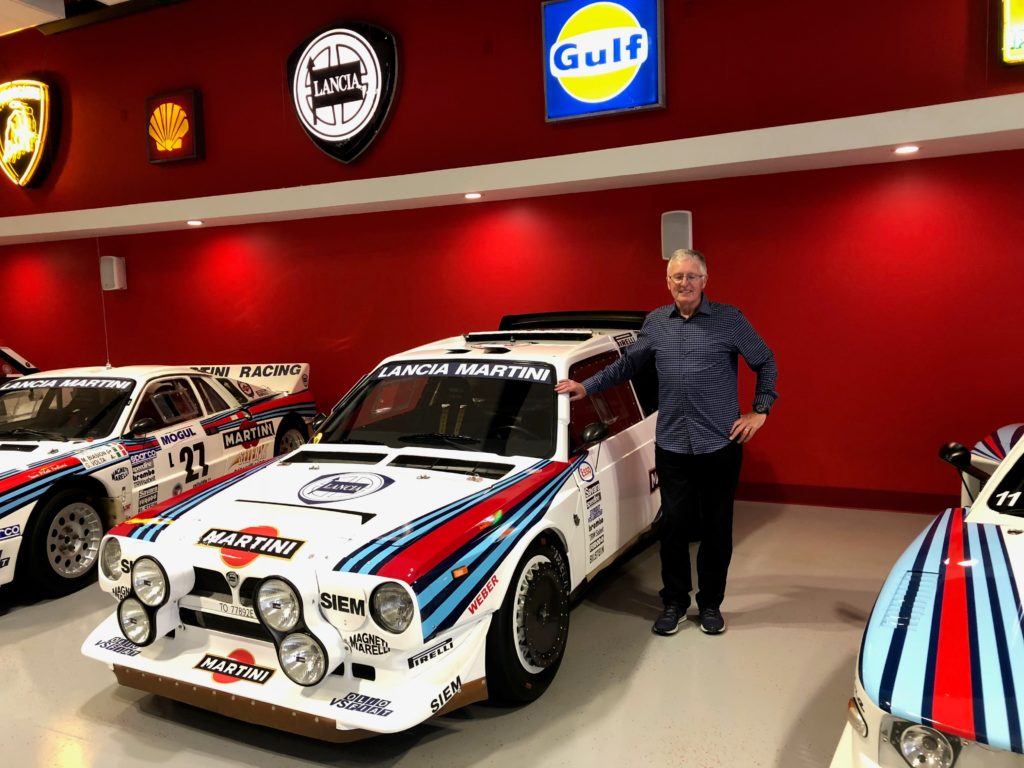 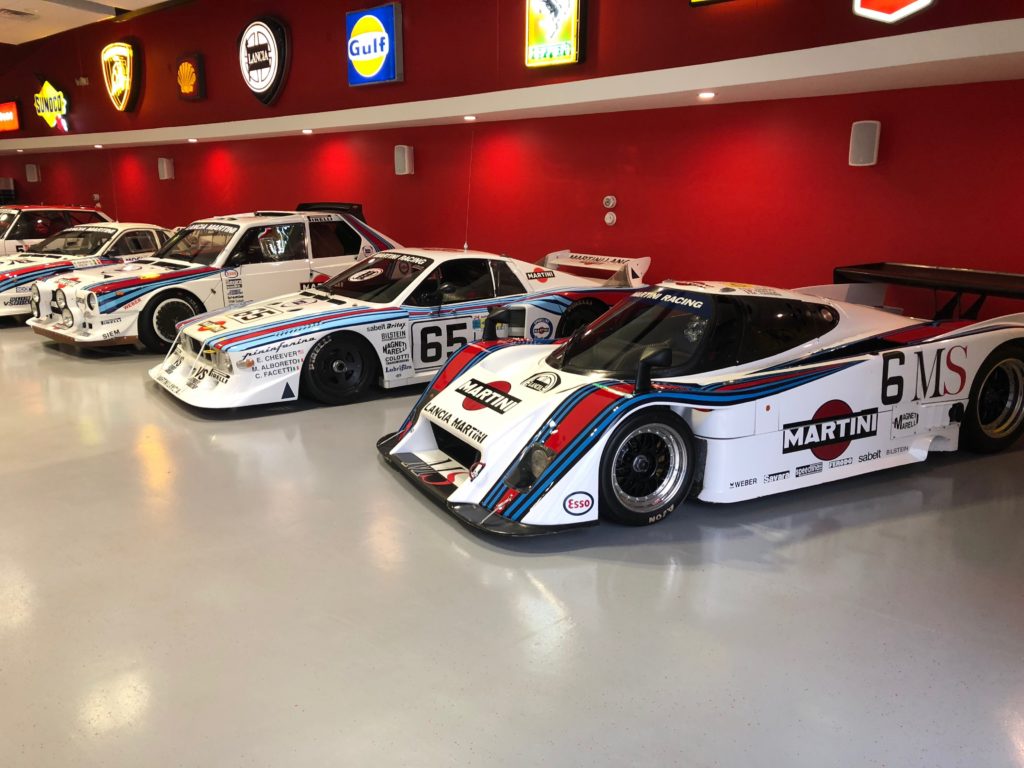 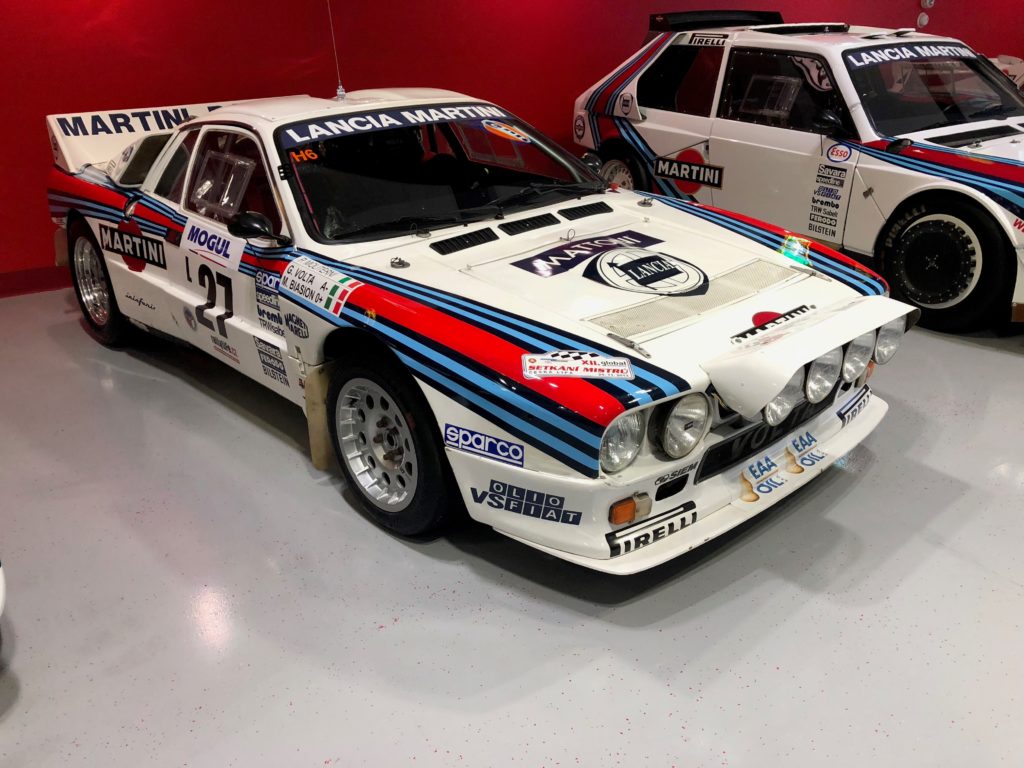 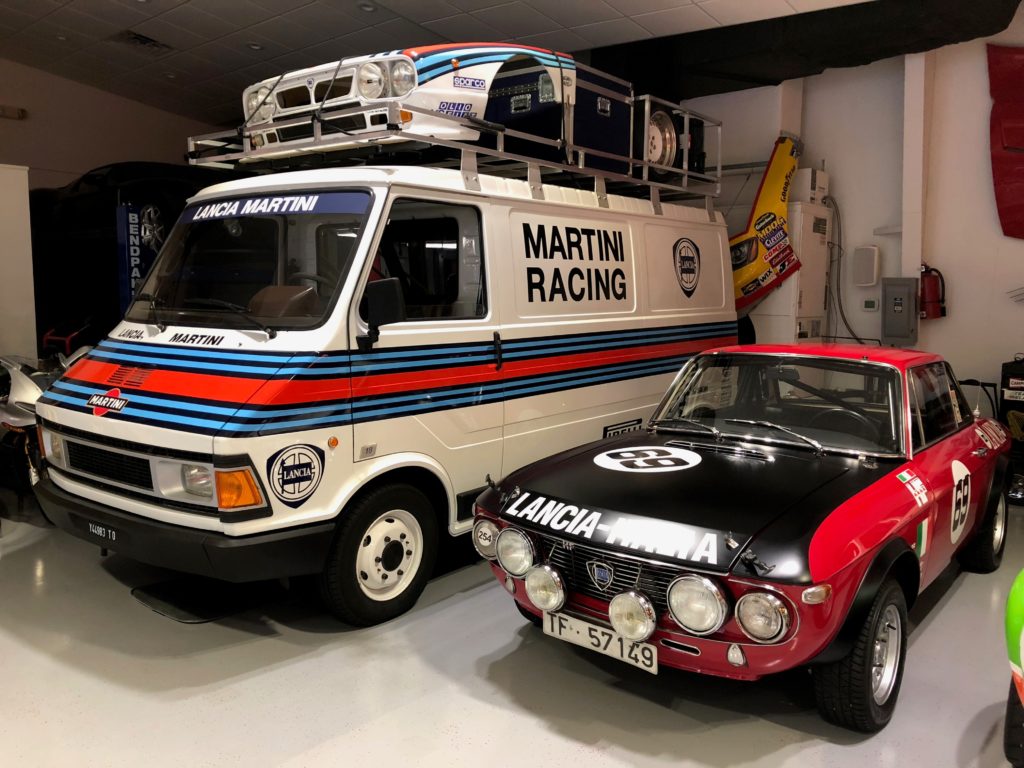 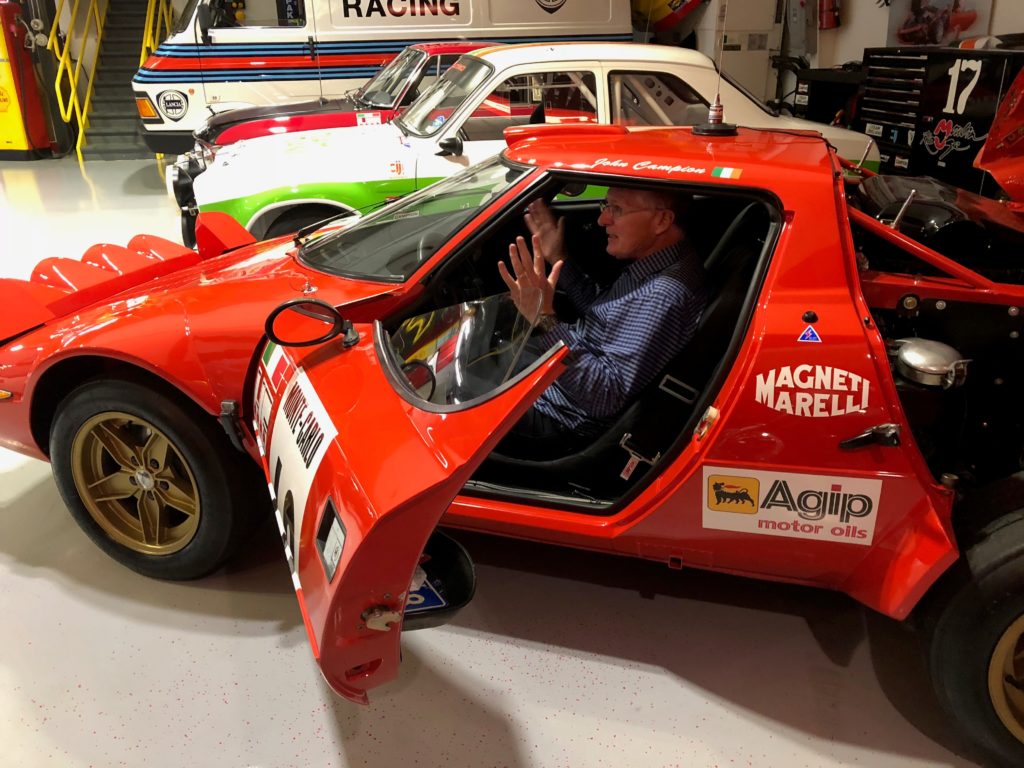 Beta Monte Carlo
S4
037
Fiat 131 Abarth –Alitalia
Stratos
Fulvia ‘Fanalone’
Fiat transporter.
Out of picture was a Delta and out of the shop was a Martini LC 1 and a few odds and
ends….Ford GT, Ford Escort Twin Cam and a Mazda Sports Racing Car for John’s
wife,Suzanne.

John’s cars are featured in the October and November 2018 editions of Italia
magazine out of the UK. 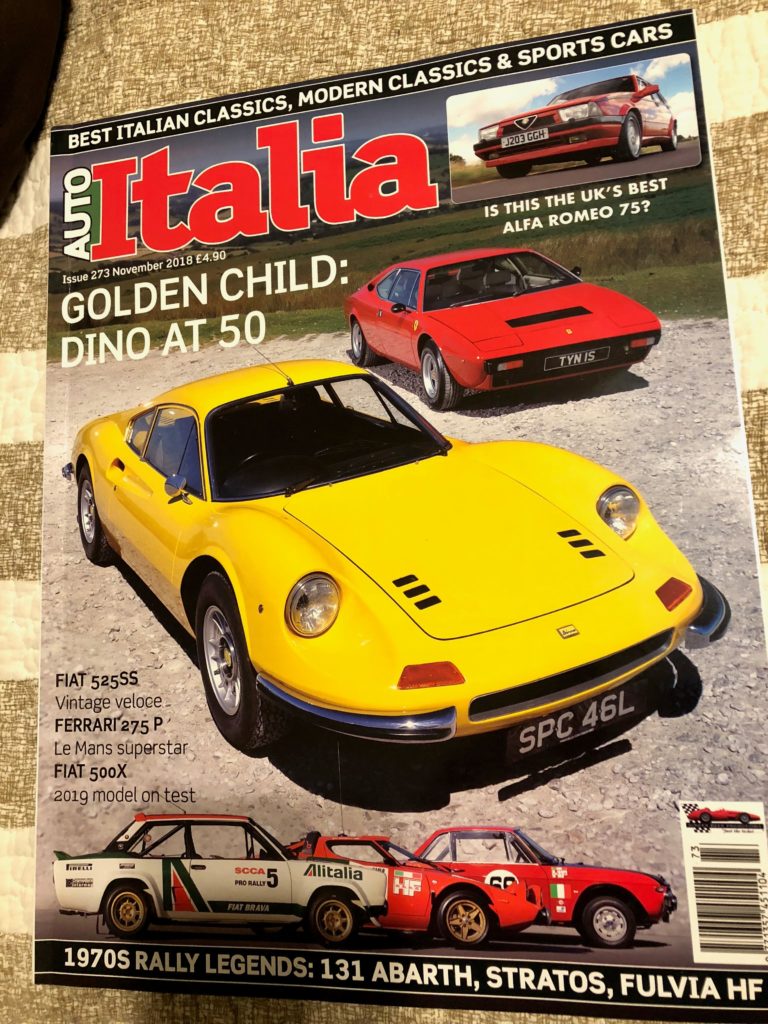 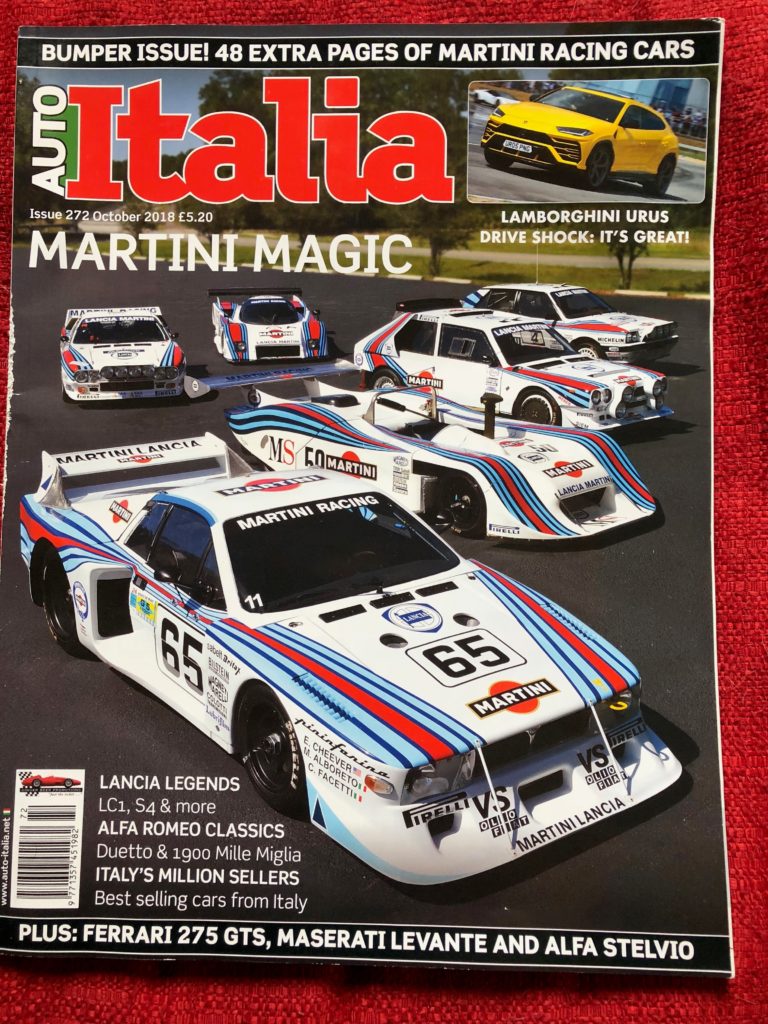 I was delighted to present John with an honorary 2019 membership of our club, a
forty-five year old Lancia key fob and a model of a Martini Delta….he was most
pleased. 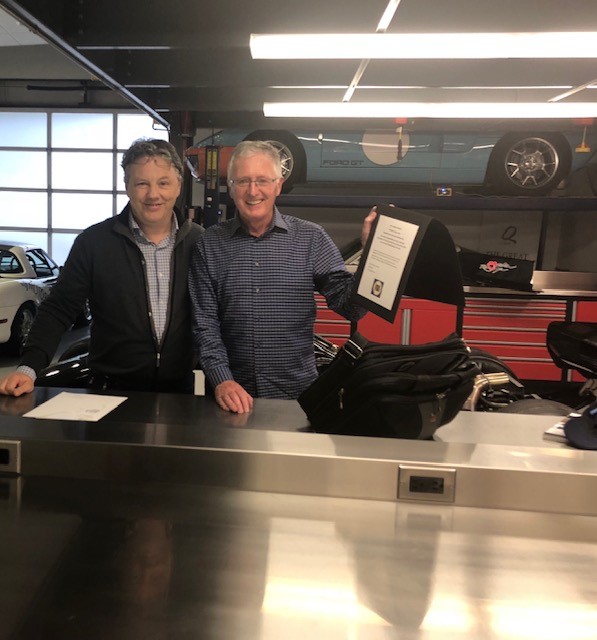 Shannon , another assistant, presented each of us with shirts and jackets
representing CJJ Motorsports that promotes and sponsors young drivers in the US
and Ireland. ( thanks to Leif Neuman and Steve Snyder for the certificate and the
key fob)
John has done an incredible job in collecting these Lancias and has now started to
show them at major events around the US…Amelia Island and The Quail in 2018.
But there is more!…John is a major philanthropist in Northern Florida giving
extensively to local schools ,universities and to cancer research.
He is a complete and very nice guy and a fabulous host and now a member of our
club!
A great visit.
P. Tom Gilmore
Lafayette, CA