As always there are way too many things lined up during the week so we tried to do what looked as a good variety of events.

Arrived on Tuesday and we tried to get into the Classic Motorsport welcome party, but when arrived, the parking was overfull and pre-registration did not make any difference so we turned our noses to Carmel and had a nice dinner at the “Hoggsbreath Inn”. It used to be impossible to find a table some years ago but with today’s many restaurants in the area it was no problem this time. Wednesday we made reservations for the Concorso breakfast with a couple of guest speakers ,who were discussing their memories around their cars. 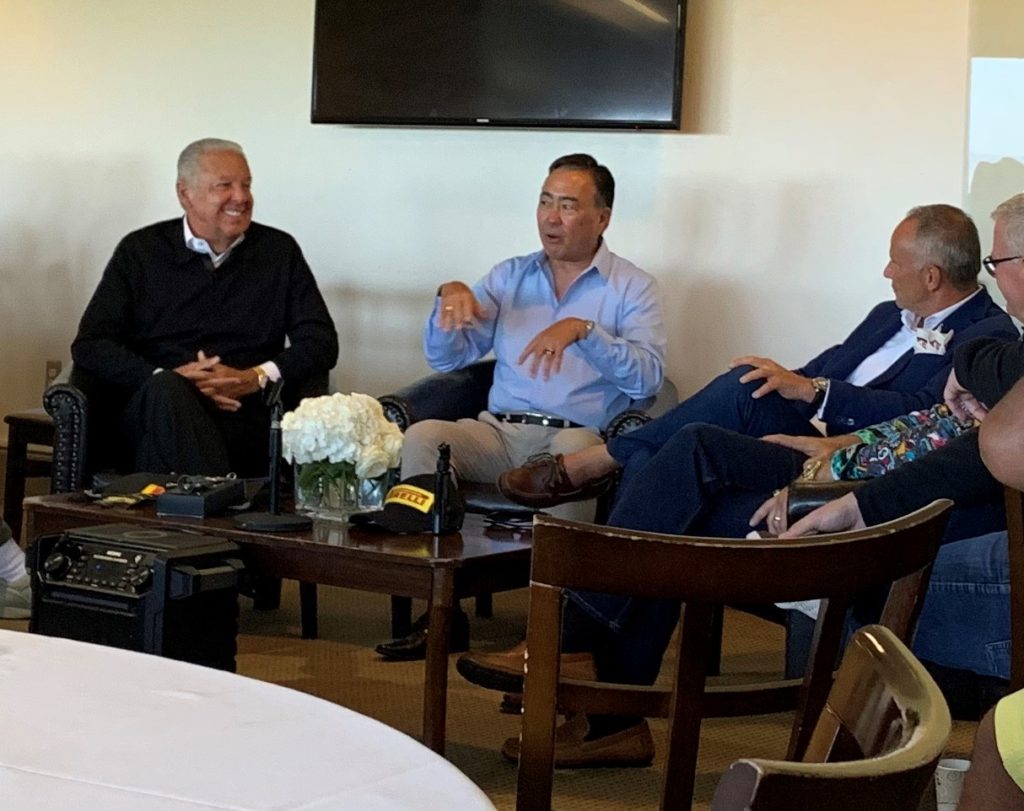 A drive followed the breakfast, with the majority of the cars being modern with a/c. After a few miles we discovered that it would have been a lot more comfortable in one of those cars! The Monterey area is known as pleasantly cool if not cold, but the drive took us inland on HWY25 with temperatures more than 100 degr. . ! needless to say we were not comfortable during the 135mile + drive, but the following lunch and glass of wine made up for some of it.

During the day we met some “old” friends from the Maserati club and from them we found out that the Maserati Club International was no longer 0rganising gatherings and that maybe  it would be a good idea to start doing events together again.

Thursday is the day of the Pebble Beach Tour d’Elegance with their lunch stop on Ocean Ave. in Carmel. To have a good parking spot we made breakfast reservation in town and were able to beat the crowds and find a great spot near the avenue. The line-up of cars is impressive with a large variety of models. Lancia was represented by a 1925 Lambda Torpedo, 1964 and 1959 Flaminia Zagato and a 1955 Aurelia B24. 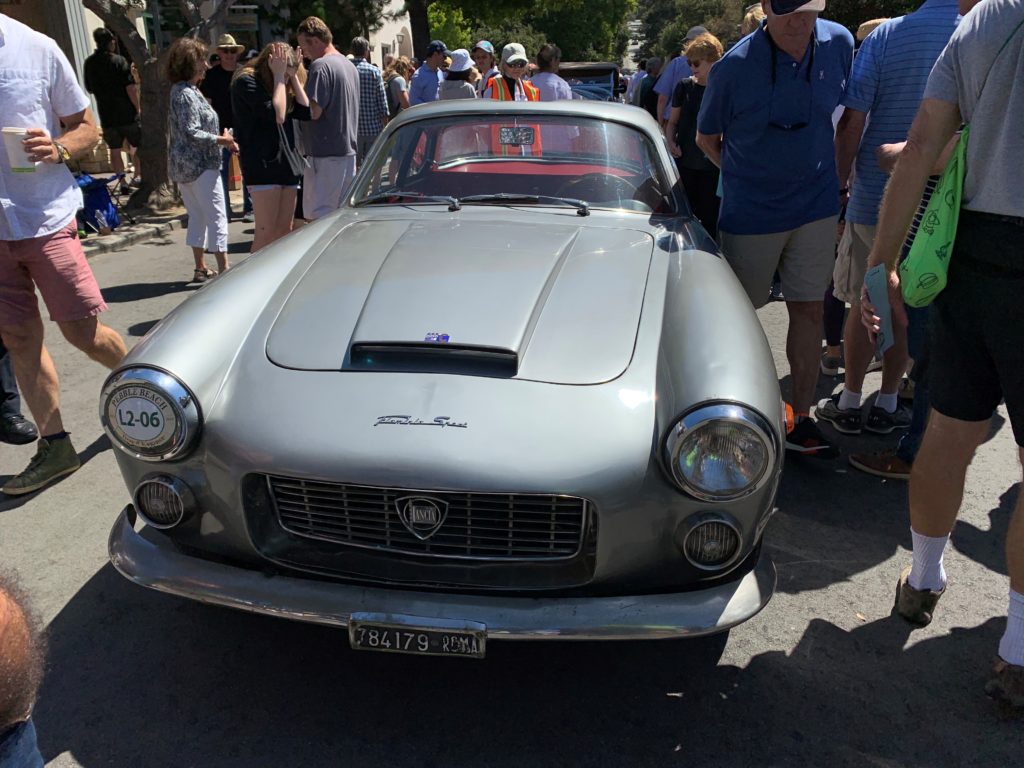 However, the most odd and interesting car in my 0pinion was the 1932 Mercedes-Benz SSKL Avus Race car shown by the Mercedes-Benz museum 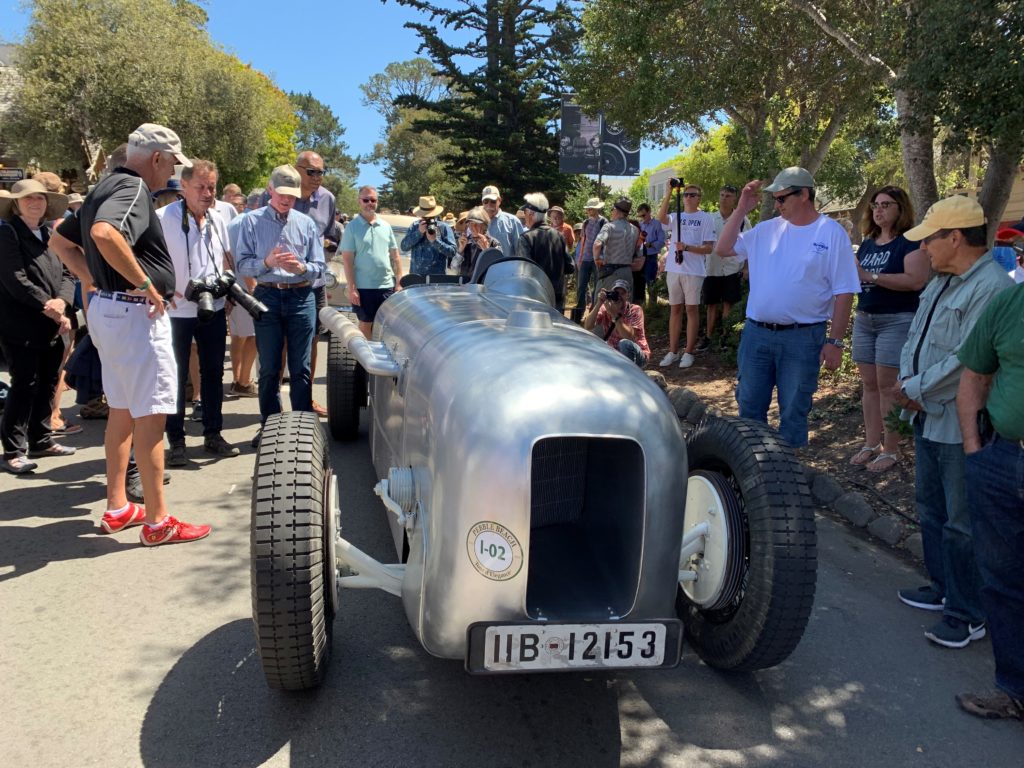 After the car display we had the “Lancia Club Lunch”. It became a small group but we all enjoyed the great food and the temperature was perfect for an outside meal. The small group included the Pering’s, Katzman’s and the Neuman’s. 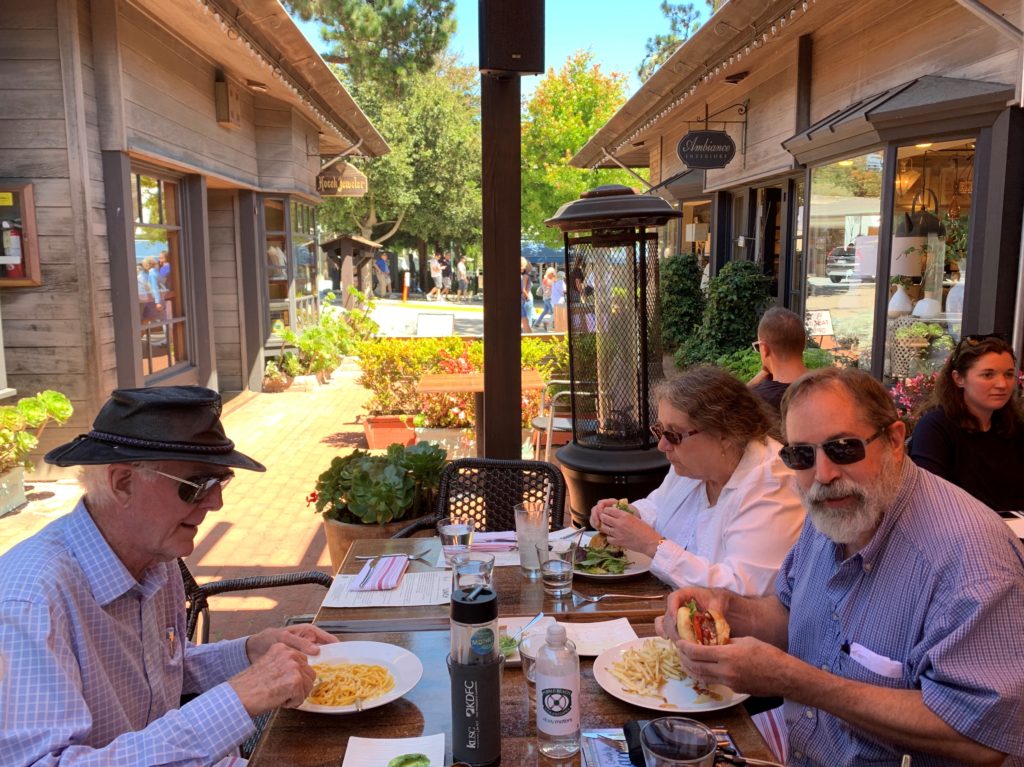 Friday most of the time is spent at the race track but this time we hooked up with the Maserati group for their drive. It was fun to once again meet some of the members we had not seen in years. The drive took us to a number of local wineries and ended with a dinner get together in Salinas. Again, the wine was poured while waiting for the food and pictures were viewed. 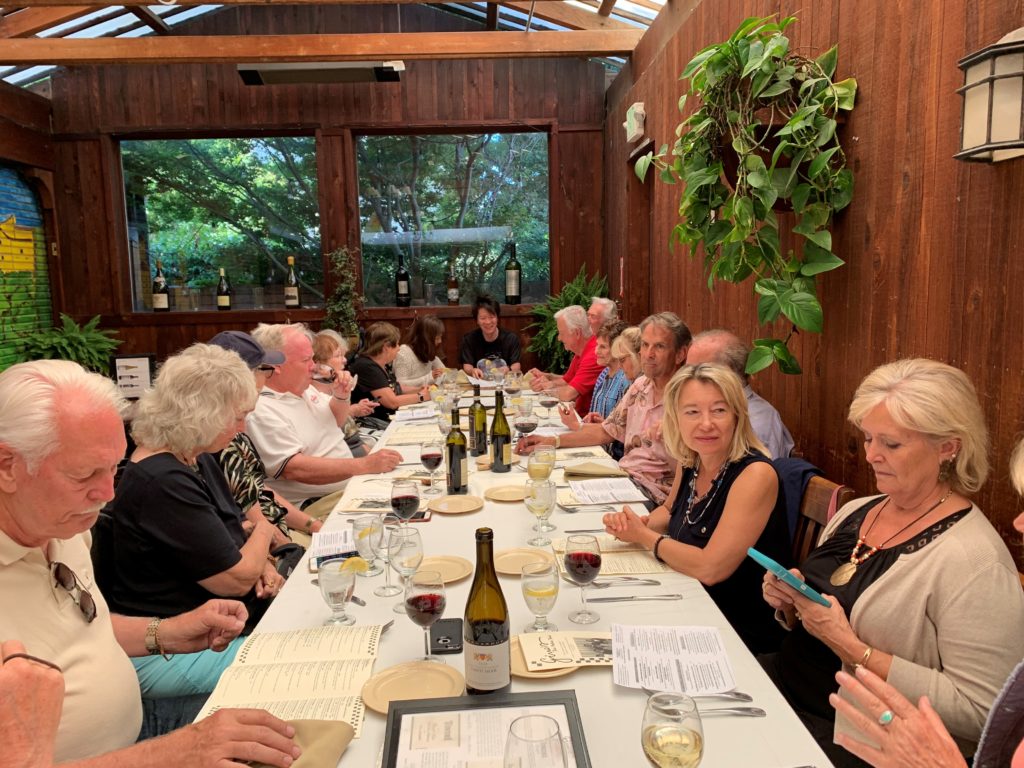 Saturday is the Concorso Italiano day and with anticipation we looked forward to the Lancia cars to be displayed. It turned out that only 9 cars were entered and with our president in bed with back problems, only 8 cars showed up, with one car displayed at the Pinninfarina area. So we only had 7 cars in our group but with a nice line-up nevertheless. We had three Scorpions, one Delta Integrale, two Fulvia Coupe and the winning Lancia, Fulvia Sport. 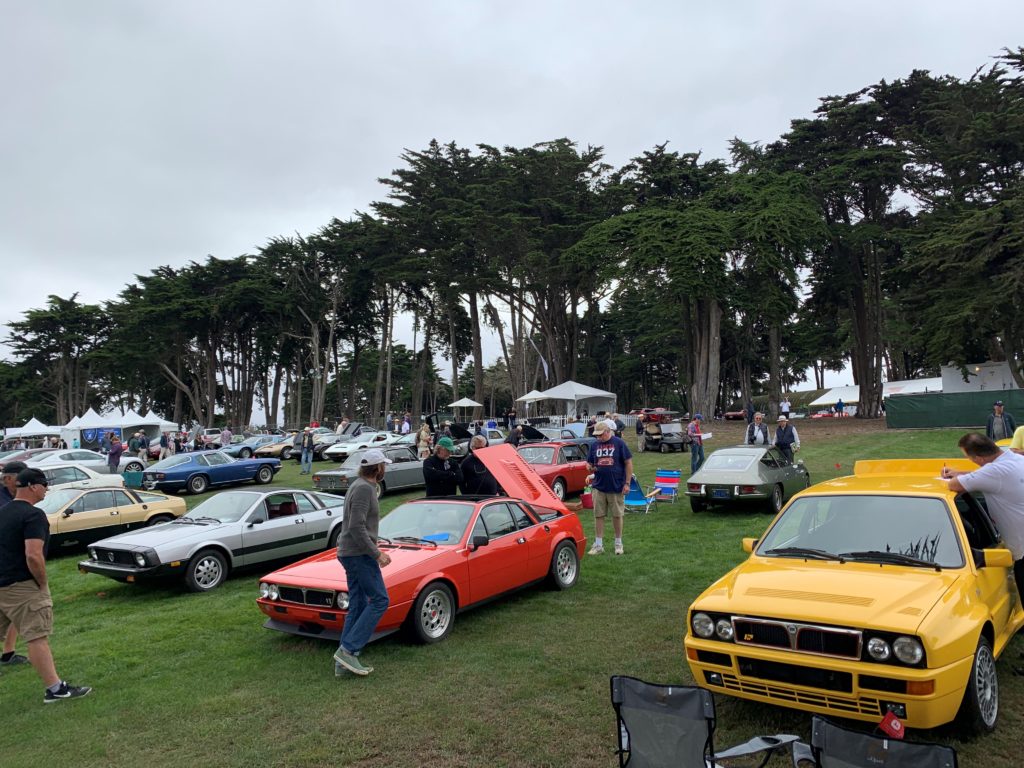 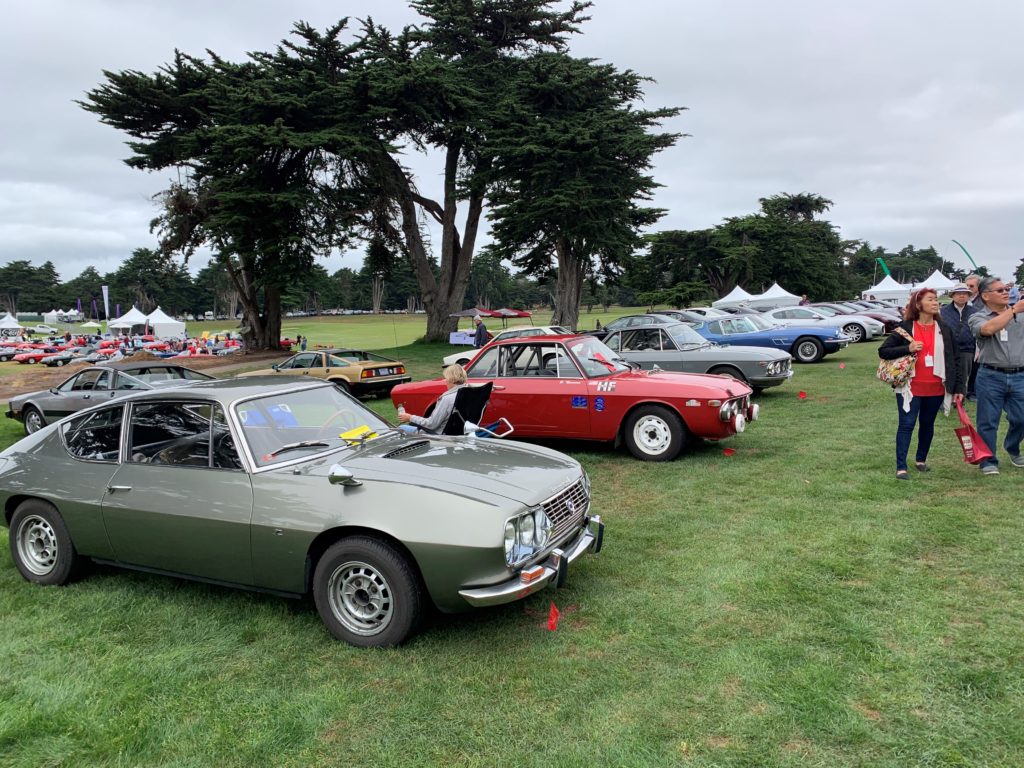 For us, the Concorso was the final event of this year’s Monterey week and Sunday was our travel day back home.